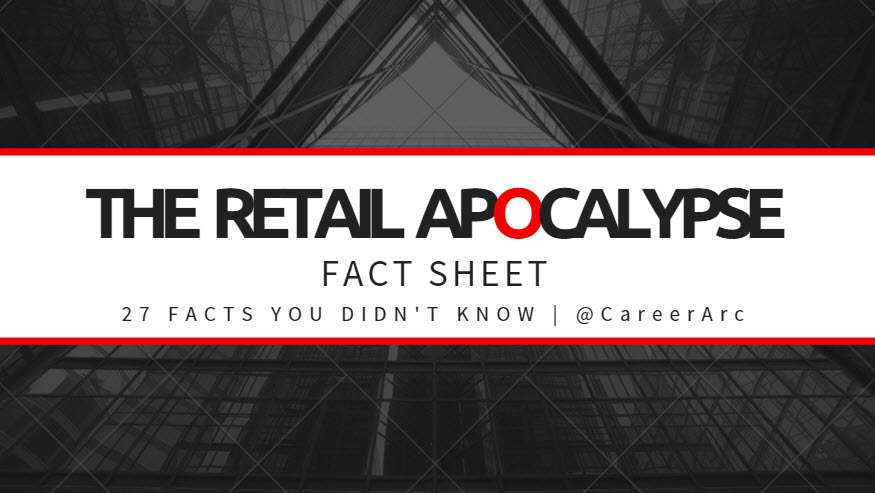 At 6,163 store closures and counting, 2017 is already one of the worst years on record for closures at the six-month mark, second only to 2008 during the start of the Great Recession.

However, 2017 is expected to breeze past that record and hit a new low for retail shops and the many retail workers who have already begun to bear the brunt of the fallout.

Below are the 27 surprising facts and predictions of what has become known as the “Retail Apocalypse.”

In April, the number of 2017 bankruptcies had already equaled the bankruptcy total in all of 2016. (CNN Money)

As of June 2017, there have been 5,300 store closing announcements, which is triple the amount during the same period last year. (Analysis by Fung Global Retail & Technology, a retail think tank.)

As of June 2017, more than 300 retailers have filed for bankruptcy, an increase of 31% from the same time last year. (Bankruptcy.com)

In May 2017, The Bureau of Labor Statistics reported that there were about 19,000 fewer people working in department stores compared to January 2017.

More than 8,600 retail locations are expected to close for good before the end of the year. (Credit Suisse)

Between 20% and 25% of the nation’s shopping malls will close in the next five years. (Credit Suisse)

However, apparel sales are expected to rise, projected to more than double its proportion as 35% of all e-commerce by 2030, up from 17% today. (Credit Suisse)

In May 2017, the US Bureau of Labor Statistics released data suggesting about 7.5 million retail jobs may be replaced by technology.

More than half (53%) of tasks in retail were automatable, a report released in July 2016 from managing consulting firm McKinsey & Company calculated. (ValueWalk)

37.7 years old is the average age for a retail sales worker.

The retail sales worker earns a median annual wage of $22,900.

BLS numbers reveal that nearly half of all retail workers are female. In clothing stores, the percentage of female works is nearly 75%.

The demographic of retail salespeople is similar to that of the entire country, with 66% of workers identifying as White, 16% Hispanic, 11% Black, and 5% Asian.

Retail vs. Coal vs. Manufacturing

Department stores have lost 18 times more workers than coal mining since 2001. (The Atlantic)

Department stores, including Macy’s and JC Penney, have shed nearly 100,000 jobs since October—more than the total number of coal miners or steel workers currently employed in the U.S. (The Atlantic)

The percentages of Black, Latino, and Asian workers in retail sales are much higher than percentages in the same demographic groups working in the coal industry and in manufacturing, which is much more white and male. (San Diego Free Press)

The first two months of 2017 generated nearly 6x more retail layoffs than the total layoffs for the energy sector – the next largest line of work in terms of layoffs.  (U.S. News)

The majority of industry experts agree that the retail bubble is real, currently bursting, and largely due to the overproduction of retail spaces, the rise of e-commerce (championed by Amazon), and the shifts in American consumer behavior.

Unlike in 2008, Americans today are shopping more than ever.

While the last spike in retail bankruptcies during the Great Recession was clearly a byproduct of consumer stress, this time around consumers are actually spending more than ever. According to Gallup, February 2017 marked the highest average in consumer spending since 2008, with no signs of slowing.

As mentioned earlier, apparel sales are actually expected to rise. By 2030, it is predicted to double to 35% of all e-commerce from 17% today.

According to Beacon Economics founding partner Christopher Thornberg, Amazon is simply taking a larger share of of the brick-and-mortar sector than ever before.

Since the start of the Great Recession, the e-commerce sector has created 355,000 new jobs, compared to about 50,000 total jobs lost in physical retail stores.

Derek Thompson of The Atlantic writes about the labor shift in his article “The Silent Crisis of Retail Employment,” stating the observed shift from retail sales to warehousing jobs parallels the growth of Amazon’s workforce:

Much of that growth has come from large fulfillment centers in warehouses. Warehousing is not used exclusively for e-commerce, but the change in warehousing jobs is highly correlated with Amazon’s job growth in the state; since 2009, warehousing employment has soared by almost 50%. Fulfillment centers pay 26% better than general retail jobs, and warehouse wages are currently growing twice as fast as the national average.

Retail brands have more to lose than stores and sales associates.

The retail brands that survive this market correction will have to think in the long term. Aside from continuing to shift business operations to facilitate more competitive online sales growth, and job growth, retail brands must also keep an eye on the strengthening link between employer brand and consumer behavior.

As recent examples of employment-related scandals show, a company’s reputation as an employer can immediately impact revenue and market share. Our recent industry study found a few relevant risks and opportunities:

There is a growing body of statistics that aim to unearth the true cost of a bad employer brand. Retail brands that have had to, or are about to, undergo the difficulty of layoffs during this transition, must now more than ever reflect on how they treat their employees as they exit the organization.

Providing adequate severance and career assistance like outplacement could very well determine if the employees who leave the organization later return as loyal customers.